Affiliated with the Golden Retriever Club of America…

Affiliated with the Golden Retriever Club of America… 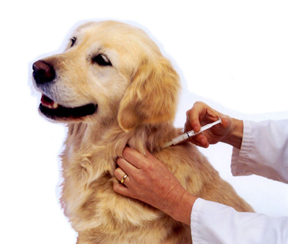 Maya Yamagata, MS, DVM,MS
Hawaii Veterinary Vision Care
Ophthalmic Consultants & Surgery
1021 Akala Lane
Honolulu, Hawaii 96814
(808) 593-7777 | FAX: (808) 589-2267
• Obesity Diseases in dogs are on the rise and pose a major health concern for your furry friend.
Resisting those big pleading golden eyes can be difficult, but don't give in!
Overfeeding causes obesity, which directly affects your dog's quality of life.
Quite simply, obesity will shorten your Golden Retriever's life.
• Time to Cut Down on the Kibble
The causes of obesity are pretty straightforward. Ruling out any possible health issues (such as thyroid imbalance), it's simply a matter of too many calories in and too few calories used.
Dividing your dog's rations into smaller, more frequent meals (three or four times a day instead of once or twice a day) should make him feel fuller.
The next step is to decrease the total amount you're feeding him by at least one-third.
Consider weaning your dog onto an overweight dog food.
It has the same balanced nutritional requirements, minus the extra calories and fat, plus extra fiber.
Eating high fiber dog foods will help your dog feel fuller and more satisfied.
• Statistics on Obesity
Unless you have a finicky pooch (not likely with a Golden), your dog is probably overweight.
A 2006 article in The Journal of Nutrition reported that an estimated 25 to 40 percent of American household pets are obese.
Current research on obesity indicates those figures are continuing to rise.
A common definition of obesity is when a dog's weight is at least 20 percent higher than his ideal body weight.

Here's another way to think of it:
• a Golden that weighs 75-pounds, but should be 65-pounds (10-pounds overweight) is comparable to a person who weighs 140 but whose ideal weight should be 120-pounds (20-pounds overweight).
• Is that an obese dog in your pond?
How do you tell if Chunky Charlie is fat?
These tests can help you determine if your dog is fighting (and losing) the battle of the bulge:
• Put your hands on on hos back with your fingers curled around his rib cage.
• You should be able to feel his ribs (using very light pressure), even under a lot of hair.
• When you stand over him and look down, our dog should have a defined waistline behind his rib cage and in front of his hind legs.
• You should see a curve in his body where his 'waist' would be.
• Those dreaded Canine Obesity Diseases
Now that you've determined your dog has a weight problem, let's look at some obesity diseases that could be lurking in his future.
You can easily see that your dog is pudgier than he should be. What you can't see is the layers of fat piling up deep inside him.
One of the greatest dangers to your dog is a heart muscle that's been weakened by accumulated fat deposits (just like with people).
Equally dangerous is a liver that can't purify your dog's body of toxins because of all the fat deposits in and around it.
Or, he could end up with a pancreas that can't produce vital enzymes and hormones because of fat interference.

Some of the most common canine obesity diseases include:
• diabetes in dogs occurs more frequently when they're overweight.
• packing around extra pounds can damage your pooch's tendons and ligaments.
• canine osteoarthritis, the most common form of arthritis in dogs, is worse in fat dogs due to stress on their joints.
• elbow and hip dysplasia can be triggered or aggravated by excess weight
• bodyfold dermatitis causes redness, oozing and itching in those skin folds on your dog that shouldn't be there (like his 'love handles').
• obesity can cause a herniated disc or increase the pain of an existing one.
• obesity could even result in your dog's partial or total paralysis from disc problems.
• Putting your dog on a weight loss program
Most veterinarians are happy to have you bring your dog in for a free monthly weigh-in, where the staff can keep track of his weight on a chart in his medical record.
Your vet will want to check for other medical problems first, and record your dog's starting weight on his medical chart.
He can also offer some valuable advice as to the best for a dog needing to pare a few pounds.
He'll want to see your dog periodically to evaluate your dog's progress and adjust his diet as necessary.
• Let's get moving
Food and water are only part of the weight loss equation. Exercise has a lot to do with it too.
Dogs can become sedentary in their middle years, which can lead to unhealthy weight gain and related obesity diseases. This is a time when they should be enjoying life, not turning into four legged couch potatoes.
Getting involved in dog sports such as agility, musical freestyle, and flyball can make a big difference in your dog's quality of life, contributing to both physical and mental health.
Or, you might just go for a daily walk or two, which is certainly better than no exercise at all.
Scientists have recently discovered that if you exercise with your dog, you both lose weight. Amazing logic, isn't it?
• Obesity prevention is easier than treatment
One simple way to help your dog avoid the obesity diseases caused by wright gain is to limit his consumption of commercial treats, which are usually high in fat.
Raw, washed vegetables are actually a good snack for your dog (and you too!). In fact, carrots have the added benefit of giving him chewing exercise.
When your dog comes around with that begging look in his big brown eyes, don't just toss him a biscuit or refill his food dish.He isn't looking for food as much as he's craving your attention. (Ok, maybe he wants both).
Instead of sharing fattening snacks, share yourself with your dog: play fetch, practice a dog sport, or go for a walk.
There are more ways to a Golden's heart than through his stomach!
Wouldn't you like your Chunky Charlie to live longer and avoid a whole laundry list of obesity diseases? If so, cut back on the kibble and hit the road!
Kept lean, your Golden Retriever will stay active and healthy well into his senior years.

Alert provided by FDA on July 12, 2018
GRCA shares our members’ and other dog owners’ concern and distress regarding the potential link between certain diets and the development of a serious heart disease called dilated cardiomyopathy (DCM). DCM is a disease of heart muscle that results in an enlarged heart that has difficulty pumping effectively, and that may lead to congestive heart failure and sudden cardiac death. In some cases, DCM may improve if caught early and treated appropriately.

A serious condition
This condition became recognized as a specific syndrome in this breed about 15-years ago, but it is often not diagnosed until too late in the course of the disease.

It is probably the most common cause of blindness in Golden Retrievers. It is important for owners of Goldens to know the early signs because the stages are subtle and may not be detected during a routine check-up.
• Stage One
Slow, progressive darkening of the iris. Most Golden Retrievers have chestnut or golden brown irises. The disease starts as a slow freckling or darkening of the color.
Sometimes, the eyes become slightly 'bloodshot' or 'veiny'.

• Stage Two
At this stage, the eyes are bloodshot. The irises are dark, and the pupil margin becomes rounded as the edge of it becomes coated with fibrous tissue and starts to contract.
The edge loses its normal ruffled appearance and becomes smooth. Often, there is a faint haze on the surface of the lens, in the pupil.

• Stage Three
Pigment cells start to leave the iris and attach to the lens. The iris starts to adhere to the lens, which causes the papillary light response (the decrease in size of the pupil when a light is shined in it) to decrease.
Often there is a fluffy gray substance called fibrin on the surface of the lens.

• Stage Four
The progressive damage causes glaucoma, which results in rapid blindness, often over a period of only a day or two. The blindness is often irreversible.
If the cases are caught in stages one or two, and appropriate treatment is begun and carried out faithfully, most dogs can be prevented from going blind.

The treatment consists of anti-inflammatory eye drops of either or both:
• corticosteroids
• nonsteroidal
These will need to be used for the rest of the dog's life because the disease cannot be cured.
Remember:

If the disease is caught in Stage One or Stage Two:
• the eyes should be tested for glaucoma every six months.

If the disease is caught in Stage Three:
• the eyes should be tested for glaucoma every three months.
Owner's Responsibility

Owners should carefully check their dog's eyes routinely as the early stages are often missed by very good veterinarians.

Report any progressive ocular redness or iris color change to your veterinarian. Many veterinarians prefer to refer dogs with this disease to an ophthalmology specialist because the changes can be subtle and difficult to detect without specialized equipment.

With care, we can reduce the incidence of blindness in our wonderful Golden Retrievers!